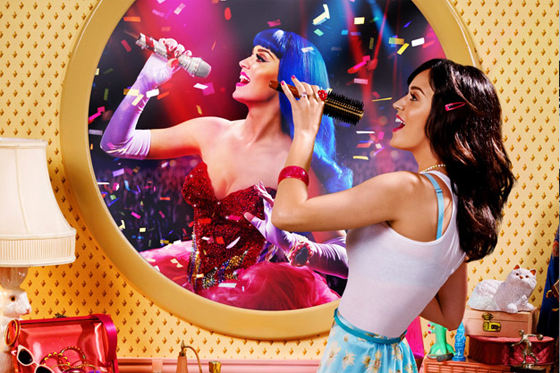 She kissed a girl and she liked it. While Katy Perry may be one of the most famous people on the planet, she definitely lives on her own, and that’s why we love her.

Born Katy Hudson, at age 15 our fave sartorial songstress was scooped up by some Nashville music industry folks who trained her how to write lyrics and play guitar.  Believe it or not, one of Katy’s first albums was a gospel rock album, a far cry from singing about tonsil hockey with girls. It must have been her move to LA at age 17 that provoked her more adventurous side.

Since then, we’ve seen her release another hit album, “Teenage Dream” which topped the charts again and again, but what really got us feeling the Katy fever was the release of her two fragrances, Purr and Meow.

Today, after a way-too-public divorce with British asshole/comedian Russell Brand, Katy is ready to show the world just how hard she’s worked to get to where she is, in her very own movie. Check it out.