Fashion for Jandie on Friday, April 5th at V Lounge in Santa Monica will benefit Jandie Sitton-Parker in her battle with stage four of a very rare type of cancer, mesenchymal chondrosarcoma. Hosted by Jandie’s best friend, fashion stylist & designer Sheree Carella, and co-hosted by Brian Raider of Northfield Films. The event is sponsored by entertainment social media company FAMEUS, who will be doing media coverage & giveaways, Le Fashion Truck & Blvd. Love will be open outside, during the event donating sales proceeds. 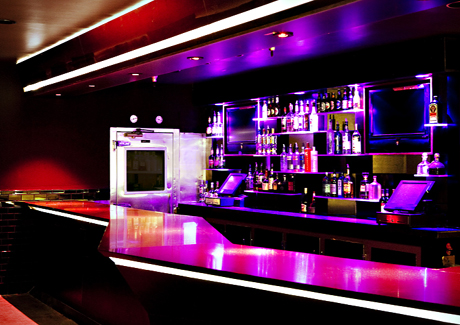 Red carpet will be hosted by the “Go-To” Style Diva, Lisa M. Berman, for Original Living Magazine, starting at 9PM when doors open, with a $10 suggested donation at the door. Meanwhile, inside V Lounge there will be a raffle and silent auction, and at 10:30 PM a live performance will open the fabulous runway show featuring various designers. After the fashion show, their donated ensembles will then be sold during a live auction to benefit Jandie. Designers include We Are Handsome, Velvet Heart, FROCK LA, Devon Thomas, L.A.M.B. donated by Style PR, Articles of Society, Adolfo Sanchez, Valerj Pobega, Elizabeth Laine, Scotch & Soda, Claudette, Dogeared Jewelry, LAS Jewelry and Loschy. Jandie’s outfit provided by Danyel’s Mobile Designer with accessories by Sculpture To Wear Gallery. Photo booth sponsored by Snapgram Photobooth. V Lounge will also be donating bar proceeds. 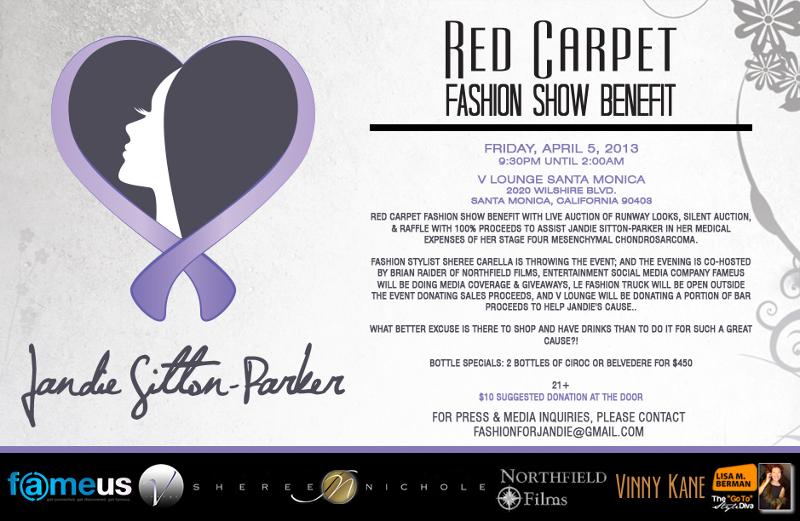 [highlight color=”pink”] Jandie’s Story: [/highlight]
Jandie Sitton-Parker has been diagnosed with stage four of a very rare type of cancer, mesenchymal chondrosarcoma. She was told by doctors she had better chances of winning the lotto than getting this. For a couple years she wasn’t able to walk because of this blood clot on her leg, and doctors blamed her for being addicted to medication and brushed off her severe pain. One ordered to begin physical therapy, which in result she broke her leg.

Finally, someone was smart enough to think of doing an MRI where they found this cancer in her bones, which by now had spread to her lungs as well. Had they checked from the get go, instead of blaming her for wanting pain medication, they would have stopped the cancer from spreading.

She has begun different treatments of chemotherapy in hopes of ridding her lungs of this terrible cancer. If the doctors can do so, they can then amputate her leg above the knee to get rid of the cancer in her bone, thus freeing her from this cancer.

In 5 short months, Jandie loses her health insurance, leaving medical bills in the millions. The prosthetic alone will cost $60,000. Her advocates believe she has enough stress on her plate and needs to focus on the fight and not worry about finances and medical bills. Donations may be made for Jandie for the event by contacting Sheree.

Please share about this event and let’s help Jandie!