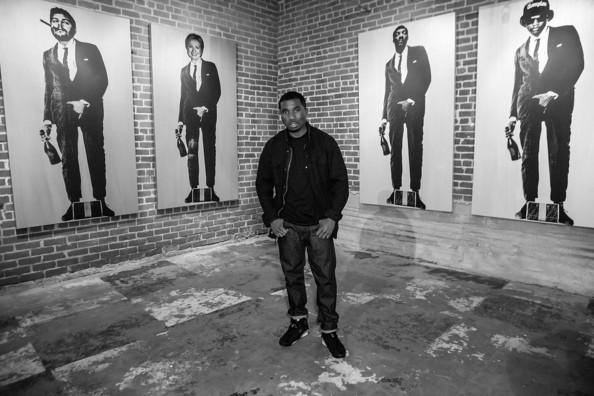 Visual artist, Knowledge Bennett‘s  iconic paintings of Madonna, Beyonce, Miley Cyrus and Rhianna from the continuation of the “The Cojones Series” to be unveiled at the opening on Thursday, March 26th at Guerilla Atilier  427 S. Hewitt, Los Angeles, CA 90013 from 7:00- 10:00. In addition, from Knowledge’s  “Cojones”collection, Mr. Bennett will gift the larger than life-size Eazy -E to his daughter at a private gathering at The Atilier Gallery at 6:00PM prior to the opening.

Knowledge Bennett is a self-taught American artist born Dec. 5th 1976. He began his love affair with the arts after moving to Los Angeles, California for the first time in 2004. 10 years later, after much success in NYC and the surrounding North East area, he’s chosen once again to relocate to the City of Angels.

Focused on painting celebrity icons of past and present, Bennett explores the thin line between fame and infamy. Within the last 3 years we’ve seen an upward thrust in his career, from opening his own gallery and representing other artist, to himself participating in solo and group exhibitions in major markets such as New York, Miami, and Los Angeles. When asked by one reporter “Why the celebrity, why paint what so many before you have painted time and time again?” Bennett simply replied, “Do you have any idea how many flowers were painted prior to Claude Monet’s Water Lilies series. It’s not what you do, but rather how you do it.”

Spring 2014, Bruce Lurie Gallery of Los Angeles, is set to debut his highly anticipated “COJONES” series. Quite the tongue and cheek pop depiction of modern day giants. “I’ve painted this series in response to the way our society has grown accustomed to persecuting today’s iconic figures. In order to endure such humiliation and ridicule, one must possess the courage required to withstand such adversities. As a visual artist I speak to the times in which I exist. My influences stem heavily from popular culture; therefore, this is what I choose to express artistically.”

Find out more about the artist: www.knowledgebennett.com