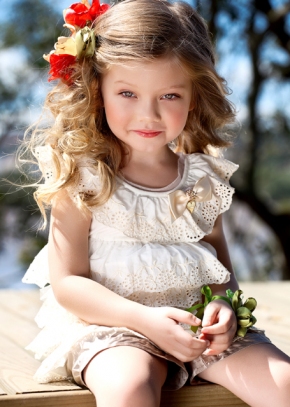 Move over Suri Cruise, there’s a new fashionista in town.

Duda Bündchen, niece of Gisele Bündchen, started out her modeling career as the face of Brazillian kids’ clothing line Brandili Mundi, and has recently come on as the line’s designer. Rumor has it, she takes after her supermodel auntie.

Since Duda’s already got the famous name, why not capitalize on it? She’s obviously got the look too. We’re happy she’s skipped the Toddlers and Tiara’s fake teeth insert called the “flipper,” and gone for a more natural look for her debut video.

We imagine Duda’s about as hands on as a 5-year-old would be aloud to be, picking out fabrics and colors she likes, but ultimately, it’s the name the line is after. Over all, it’s a great concept that is sure to generate sales, because going without designer pieces when you’re 5 is sure to cause a tantrum.

Perhaps soon mini-Bündchen will join Gisele on the Forbes list.